What do champion sprinters - Fastnet Rock, Black Caviar and Miss Andretti all have in common?

Each one has Royal Academy in their pedigree as their grand sire. 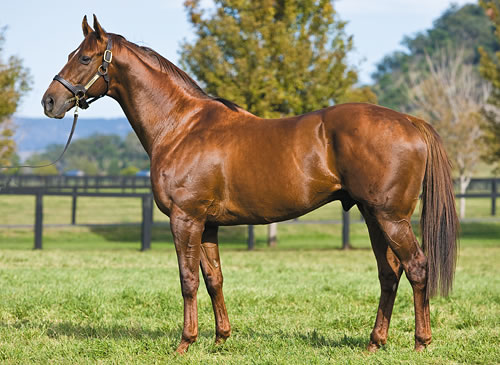 RAHEEB is by the successful sire of sires, Royal Academy whose other sons at stud include Bel Esprit, Strategic Maneuver and Meld. Raheeb is a member of a champion Australian family. It is littered with high class sprinters who have won or been placed in the country's most elite sprint races. His dam Gatana was a dual stakes winner who ran 2nd in a Group 1 Newmarket Handicap. Raheeb is a full brother to Piccadilly Circus who was also a dual stakes winner and is the dam of the Group 1 Oakleigh Plate and Group 1 Lightning Stakes winner FASTNET ROCK. Fastnet Rock is proving to be a versatile and prolific sire who has produced over 90 stakes winners - he has sired Group 1 winners on three different continents which include an English Classic winner in the Oaks heroine, Qualify.

As a racehorse, Raheeb was an exciting and consistent galloper who always raced against the best company. Winning his first 2 races convincingly by several lengths, he enjoyed stakes success in the Group 3 Cameron Stakes and Listed Paris Lane Stakes in similar style. He also achieved placing’s in the Group 2 Phar Lap Stakes, Group 3 Doomben Classic and Listed Carbine Club Stakes and Listed Queensland Day Stakes. He was a close 4th in the Group 1 Toorak Handicap.

A proven sire, Raheeb has had 94 runners, for 38 winners to date, winning over 1.5 million in prize money. He is a magnificent and athletic stallion, with a sensible and kind temperament who upgrades the mares sent to him.

We look forward to a sensational crop in 2018